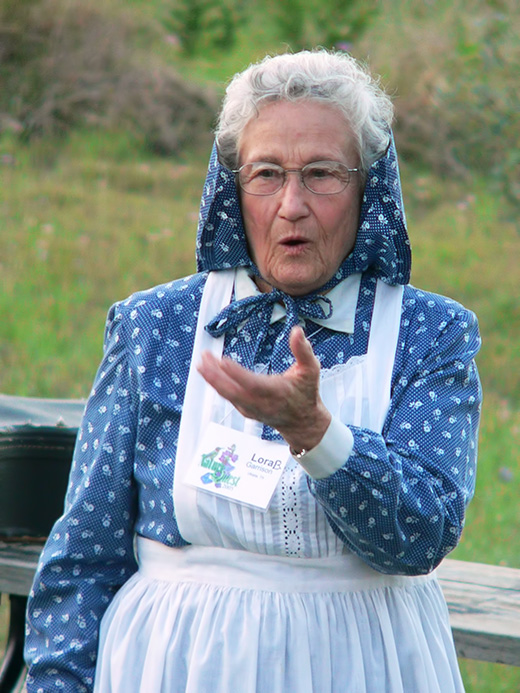 My interest in storytelling began when I was a child. All our hired hands were storytellers. After supper we would sit out on the front porch and they would tell us stories. We didn’t have a television or radio back then. One hired hand got my brother John Allen and I excited about hunting buried treasure. He told us about twenty mule teams of Spanish Gold being buried in this part of the country. There was one place he had us digging for weeks. We dug, and he watched and encouraged us to keep digging, until we hit a big flat rock and we could dig no farther. We gave up and went home. That spot had markings on the trees and a long rock had an arrow carved in it pointing due North. The hired hand moved on, time passed and we decided to go take another look. We reasoned those markings had to mean something. We found the place but not like we left it, the big flat rock had been pried up and where the rock had been was a smooth round hole, like a large jar had been there.

There was one old man we dearly loved to see coming. He was “Ol’ Man Fisher” (George Washington Fisher). He was the best storyteller of them all. He drew from his own experiences as an Indian Fighter. He told stories about buried treasure and the old out-laws too. He must have been about ninety years old when I knew him. The most remarkable thing about “Ol’ Man Fisher’, as I remember him, was that he was blind, and he walked all the way from his house to ours, it was at least ten miles. He came regularly and would stay for a long visit of several weeks. When he left he would go visit someone else. I suspect he really liked my Mama’s cooking.

These pioneer people belonged to the tradition of storytellers. I have known others. They appear in all cultures and are only beginning to disappear in the most advanced ones. Their survival is bound up with the fate of communities. When these communities disperse and farms and ranches become fewer in number, and owned more and more by absentee investors, the sources of story material and audiences dry up. There are many reasons for the decline of storytelling. Among these are the passing of craft activities such as whittling, basket making and quilting, which generate the rhythms at which stories flow, the appeal of competing voices of culture, such as television, and the increased mobility of the American way of life.

The oral histories I collected are drawn from the everyday lives of country people. Much of the information about the day-to-day activities of these people has been lost, because they were not accustomed to writing things down. Birth and death records, tax receipts, these occasional records punctuate but do not describe their lives. This work spans approximately four generations and focuses on the impact of history as it affected the family. Steeped in family histories, the recalling of names is a demonstration of how long a person has been living in one place. These family chronicles express both the bonds these people felt for each other and their land.

Mrs. Garrison's Book is Going to the Printer Soon.

Please email us to Pre-Order, or to be placed on list to notify when released.

Click here to see a larger version of the Front Cover

''Cooking Around the World''

''Cooking Around the World''

Vol 1 has many Interesting Recipes & Stories collected by Lora B. Garrison during the 30 years her husband served in the US Air Force.

Please email us to be placed on list to notify when you can Pre-Order. 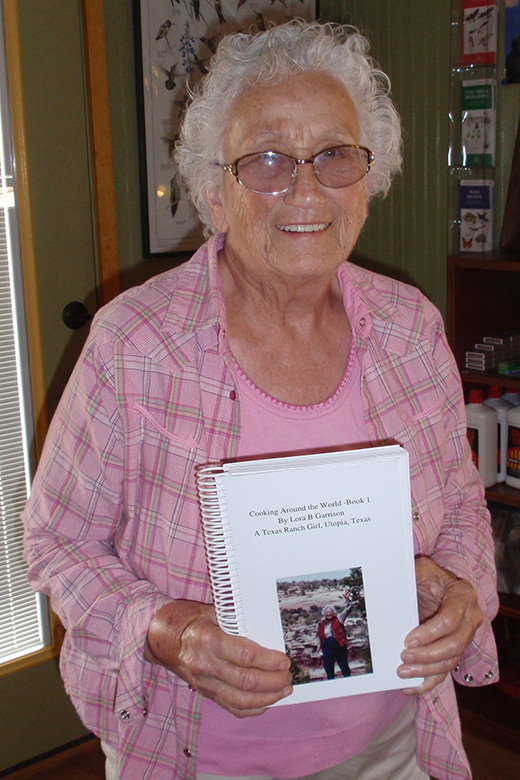 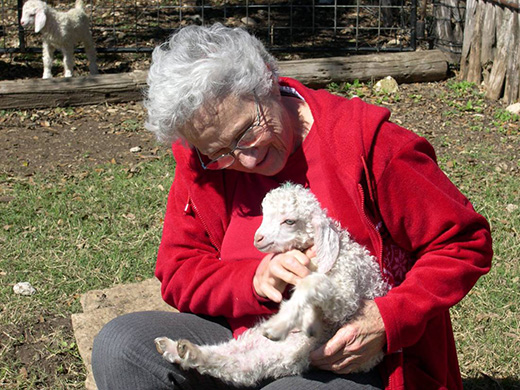 Lora B. Davis Garrison is a woman who wears many hats.  She is a historian, storyteller, businesswoman, rancher, gourmet cook, newspaper columnist, folklorist, as well as a mother, grandmother and great- great- grandmother.  She has served as President of the Caddell—Smith Chapter of the Daughters of the Republic of Texas several times, President of the Texas Folklore Society for three years, she served on the Board of Directors for the Alamo Mission four years, also on the board of the French Legation Museum for two years.  She served as President of Texas Press Women District 4 in 1983-1984.  Born and raised a Texas ranch girl, with no electricity, no running water and an outhouse in the corner of the garden.  She learned to cook on a wood stove, chopped wood and hauled water when the cistern was dry. She road horseback during her second and fourth grades to be educated in a three-room schoolhouse.  She is a native of Uvalde County and a descendant of some of the first settlers in Texas and the Texas Hill Country.

She has been collecting oral history stories since 1979.  Some of her collection of stories appeared in her weekly columns in the Uvalde Leader News for ten years.  She was voted Woman of the Year by Texas Press Women in 1984.  Her stories have appeared in magazines, newspapers, in Texas folklore publications, such as “Hog Drover” in Hoein’ the Short Rows in 1987, “The Ol’ Red Rooster Learns a Hard Lesson” in Texas Journalist on Texas Folklore in 1999, “Susanna And Her Angora Goats”, “Hog Drovers”, “Courtship And Marriage”, “A Calf For A Candy Stick”, and “Grannie’s Old Pickup Truck”, in The Family Saga in 2003, “Cactus Jack Garner As Folk Hero, Vice-President Of The United States 1933-1940”, in Folklore in All of Us, in All We Do, published in 2006.  Ranch & Rural Living Magazine requested that she write “Angora Pioneers, A History Of The Davis Family And The Angora Goat Industry” for the July 2000 issue. She wrote about Florence Fenley’s history in “Oldtimers” in 1991, Published by State House Press, an oral history collection by Florence Fenley, on a W.P.A. Project in the 1930’s.

Lora B. was a Storyteller at the Texas Folklife Festival in San Antonio for more than ten years.  She has taught Elderhostel classes on how to collect oral histories and how to pass your stories on to your family and grandchildren. She now spends most of her time writing and telling Pioneer stories in schools, museums, libraries and western festivals.

She has an educational background in Art, Fashion Design, Photography, Anthropology, Folklore and Creative Writing. She traveled the world with her late husband, Col. Roger W. Garrison, during his thirty year career with the U.S. Air Force.  They raised their five children in locations such as Guam, France, Thailand, Washington, D.C., Texas and numerous other states in the US.

She tells that in another life she taught in a Fashion Design School in Virginia and designed hats for Lady Bird Johnson, Alice Roosevelt Longworth, Mrs. Arthur Fiedler and many Senators’ wives.

Lora B. has enjoyed living back on the family ranch where she grew up, between Utopia and Rio Frio, Texas.